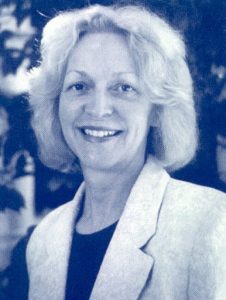 Always in our hearts and minds, Rita Bentley (OAM) who passed away 15th July 2021.
Her amazing lifetime devotion to fight for our rights to maintain access to our public forests on behalf of all bush users as well as the members of PMAV.
The PMAV committee going forward will not lose sight of her efforts as a legacy for her marvellous contribution and dedication into the future. 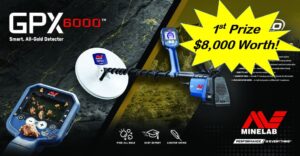 PMAV largest raffle with over $17,100 worth or prizes!
$10 tickets or buy 4 or more and get a FREE ticket!
Tickets can also be purchased at the PMAV AGM on 22nd Oct 2022 at Dunolly Town Hall,  over the weekend of the Dunolly Gold Rush Festival 22-23 Oct 2022
For full list of prizes and T&Cs here 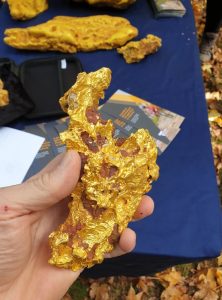 Minelab, with the nationwide assistance of state organisations representing prospectors, compiled the first of its kind, economic report into prospecting within Australia.
With almost $1Billion in GDP and over 5500 full time jobs, governments would do well to remember our contribution to not only the economy, but to the social and mental health benefits many Australian families get from prospecting.

168 years ago today, at 3 am on Sunday, 3 December 1854, a party of 276 soldiers and police, under the command of Captain John W. Thomas approached the Eureka Stockade at Ballarat.
Unaware of the approaching soldiers, 150 untrained diggers armed with muskets, picks, poles and shovels waited.
The demand was made for the diggers to come out and disband. Refusing, a single shot rang out and the troopers attacked the stockade.
The battle was fierce, brief, and terribly one-sided with the ramshackle army of miners hopelessly outclassed by heavily armed military regiments.
During the height of the battle, Peter Lalor was shot in his left arm, took refuge under some timber and was smuggled out of the stockade and hidden. His arm was later amputated.
'Captain' Henry Ross one of the seven 'Captains' of the rebellion and credited with designing the Eureka flag was killed.
Stories tell how women ran forward and threw themselves over the injured to prevent further indiscriminate killing.
The Commission of Inquiry would later say that it was "a needless as well as a ruthless sacrifice of human life indiscriminate of innocent or guilty, and after all resistance had disappeared."
Newspapers labelled the battle "The Slaughter at Eureka"
According to Lalor's report, twenty-two diggers died - fourteen miners (mostly Irish) died inside the stockade and an additional eight died later from injuries they sustained.
A further dozen were wounded but recovered.
Six soldiers died.
Captain Charles Pasley, the second in command of the British forces, sickened by the carnage, saved a group of prisoners from being bayoneted and threatened to shoot any police or soldiers who continued with the slaughter.
News of the battle spread quickly to Melbourne and other gold field regions, turning a perceived Government military victory in repressing a minor insurrection into a public relations disaster. Thousands of people in Melbourne rallied to condemn the excessive and brutal attack by government soldiers.
The actual significance of Eureka upon Australia's politics was significant.
It has been variously interpreted as a revolt of free men against imperial tyranny, of independent free enterprise against burdensome taxation, of labour against a privileged ruling class, or as an expression of republicanism.

In his 1897 travel book 'Following the Equator', American writer Mark Twain wrote of the Eureka Rebellion:
"... I think it may be called the finest thing in Australasian history. It was a revolution—small in size; but great politically; it was a strike for liberty, a struggle for principle, a stand against injustice and oppression. It is another instance of a victory won by a lost battle. It adds an honorable page to history; the people know it and are proud of it. They keep green the memory of the men who fell at the Eureka stockade."
The PMAV proudly continue this fight against the various agencies who seek to over govern, over tax and lock-up public land.
We are the ONLY organisation in Victoria who represent not only the 50,000+ Miner's Rights holders, but the many bush users who continue to lose access to public land.
Do you stand with us in the stockade or stand and watch as we lose more land and more rights every year?
JOIN NOW.
www.pmav.org.au
Ballarat P.M.A.V. PMAV - West Gippsland PMAV Geelong PMAV Bendigo Branch PMAV Central Goldfields Branch PMAV Melbourne East Gippsland branch- P.M.A.V. PMAV Melbourne ...

When in Dunolly make sure you check out Kerri White's artwork in the Dunolly Bakery Puzzleflat Art Gallery or Dunolly Bistro & Bar
A prospector, Kerri paints in a variety of styles and sizes.
Prices are very good. ...

PMAV East Gippsland Branch
DETECTOR HUNT AND END OF YEAR BREAK UP BBQ
WHEN: Sunday December 4th, 2022, at 9.30 am for 10 am start Detector Hunt
WHERE: Heyfield / Glenmaggie Road
Contact East Gippsland branch- P.M.A.V.
for location if you don’t know where to go
WHAT TO BRING: Family welcome.
A Salad or Dessert etc per family to share
Detector, pick etc. (Coin detector if possible)
Chair,
Drinks other than tea or coffee
Special dietary requirements
Appropriate weather gear
PROVIDED: Meat for BBQ
Bread, Sauce, Some plates and cutlery
Contact Graham Watt if you are coming so we can cater for this event
PRIZES for detector competition including Trophy for the year. ...

From PMAV Geelong and Ballarat P.M.A.V. branch
Hi All,
A reminder that this coming Sunday the 4/12/22 is our final day out for the year which means it’s our Christmas breakup for 2022. We will be getting together with the Ballarat PMAV branch at Smythesdale gardens for lunch and a few raffles/auctions. Lunch will be roast spit meats, salads, bread rolls and gravy which will be free to members. Soft drinks will also be free.
As mentioned there will be a few raffles, one which will be prizes donated by members, so if are
attending and would like to bring a prize to donated please do. These can be anything they don’t have to be prospecting orientated.
lunch will be ready from around 12.30 pm so people can do a bit of prospecting prior to lunch.

If you are coming can you please respond to this post with numbers of people who are coming. ...

Robyn and l will be there

Good catch up today with Neville Perry and his family, many supporters and friends from not only the prospecting community, but from the region.
Thanks to everyone who came from afar.
Coiltek Gold Centre for hosting.
Nev sends his thanks and hosted the event today like a champion.
Magistrate's decision handed down on 16th December Maryborough Magistrates court. 10am.
Since the judge has already made up his mind, nothing we say now can be used.
Very CONFIDANT Neville will be found innocent. It should never have got to this point and there should never have been a charge. Communication not something govt depts excell at..if at all.
BYO flag and support of Neville. ...

What a great support yesterday from the beautiful detector community. thank u Pmav and Chicks with Picks Australia